The goal of the HexMapOfEarth™ project is to produce digitally distributed and physically printed sets of hexagonal maps that cover the entirety of the Earth. The intended purpose of the maps is that they be used as “game boards” in table-top role-playing games to make calculating travel times easier, but hexagons being hexagons, you can use them for any purpose you can think of: wargaming, RISK, Catan…the sky’s the limit!

If you want to see examples, scroll down a bit. If you want to keep abreast of the project and want free maps, subscribe to our newsletter at the bottom of the homepage.

The first sub-project, 6MileHexMapOfEarth™, has the following features:

Example of Huge Digital Map without labels and graticules 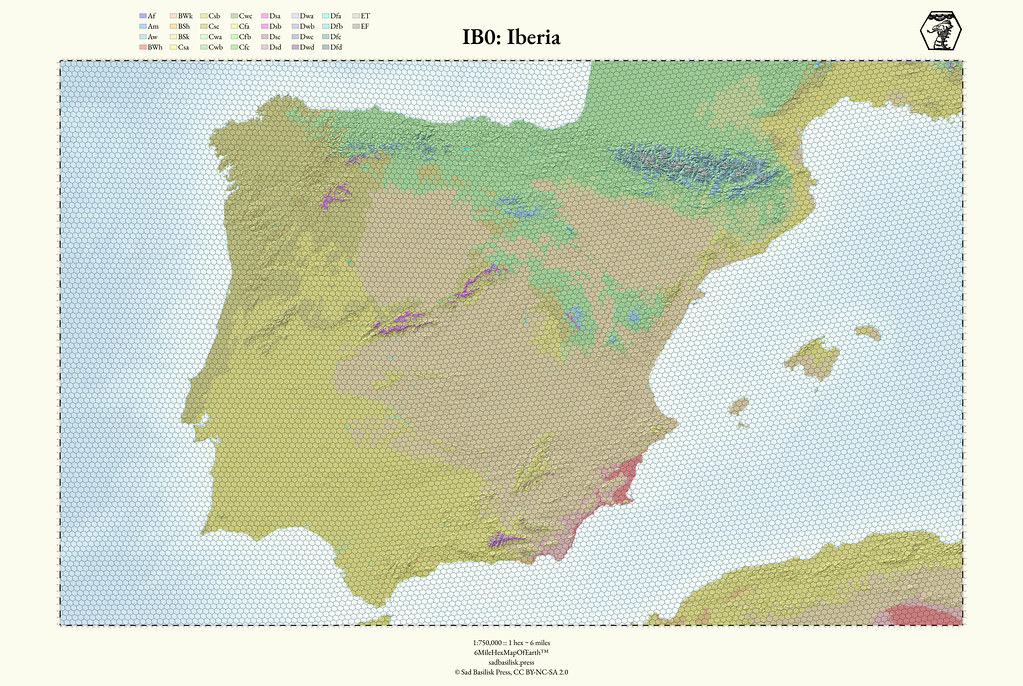 Example of Huge Digital Map with labels and graticules 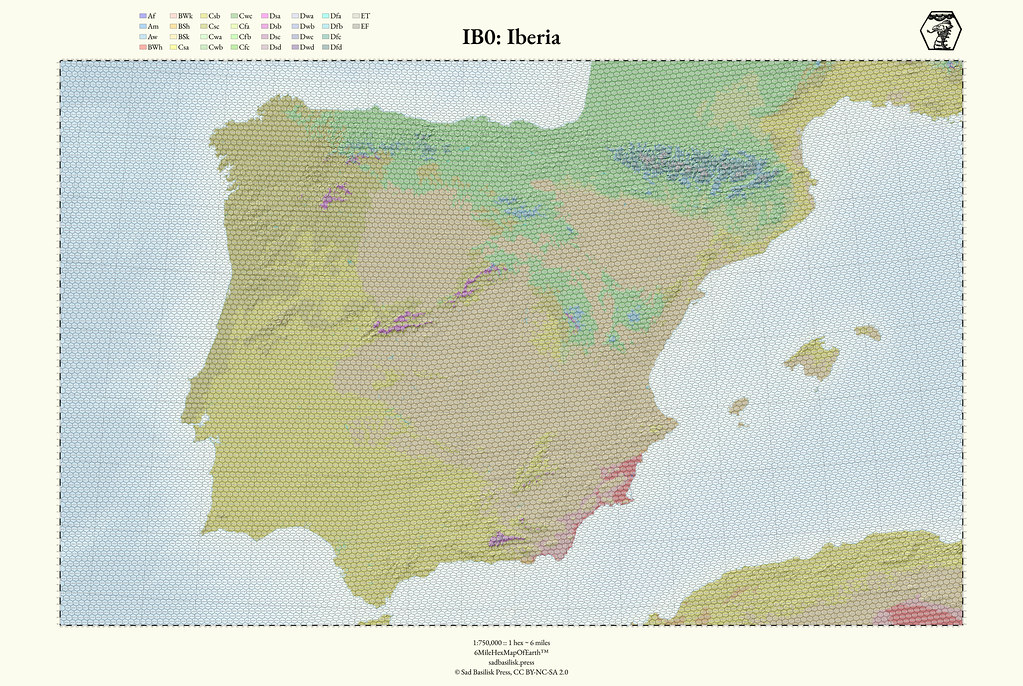 Example of Large Physical Map without labels and graticules 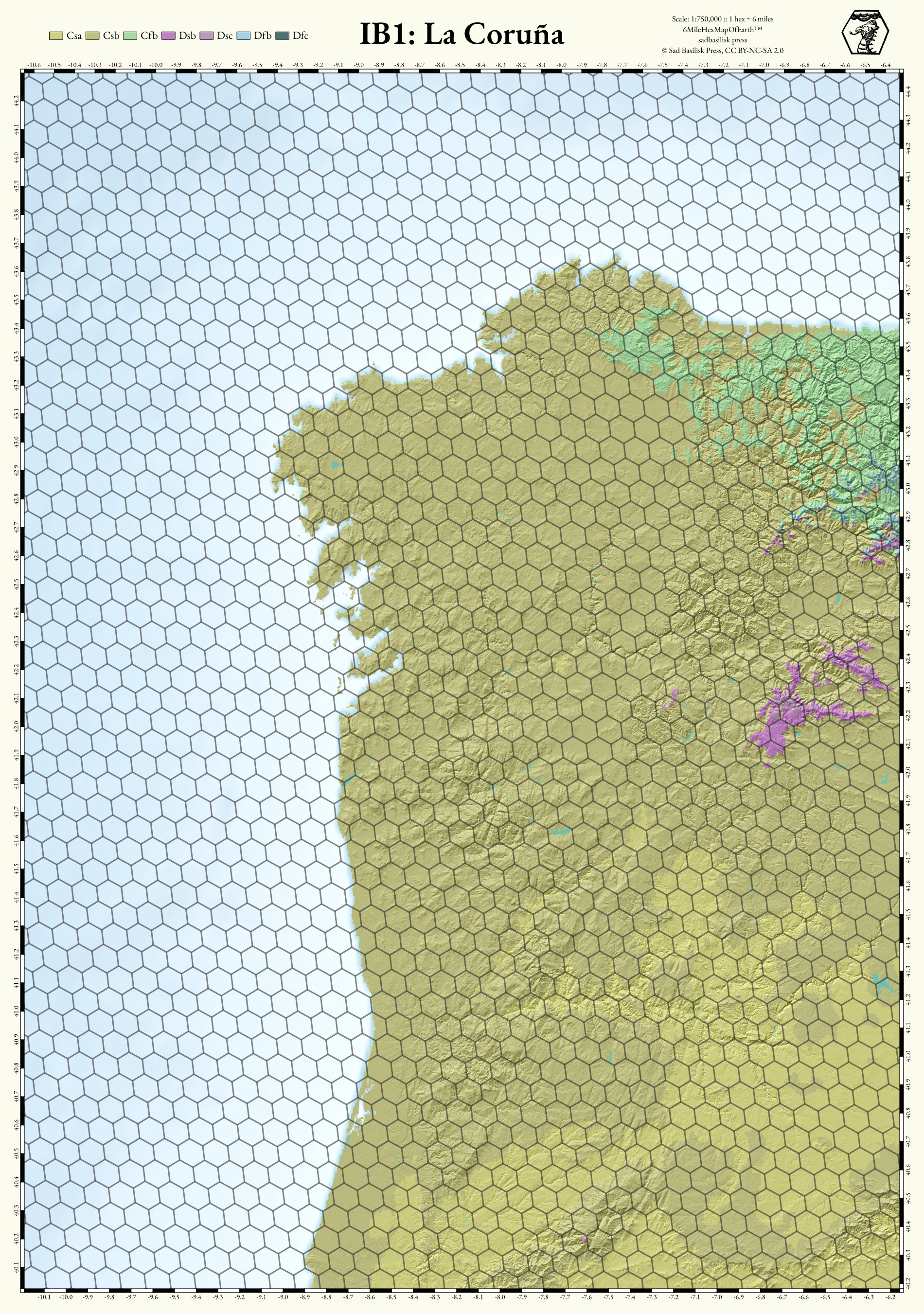 Example of Large Physical Map with labels and graticules 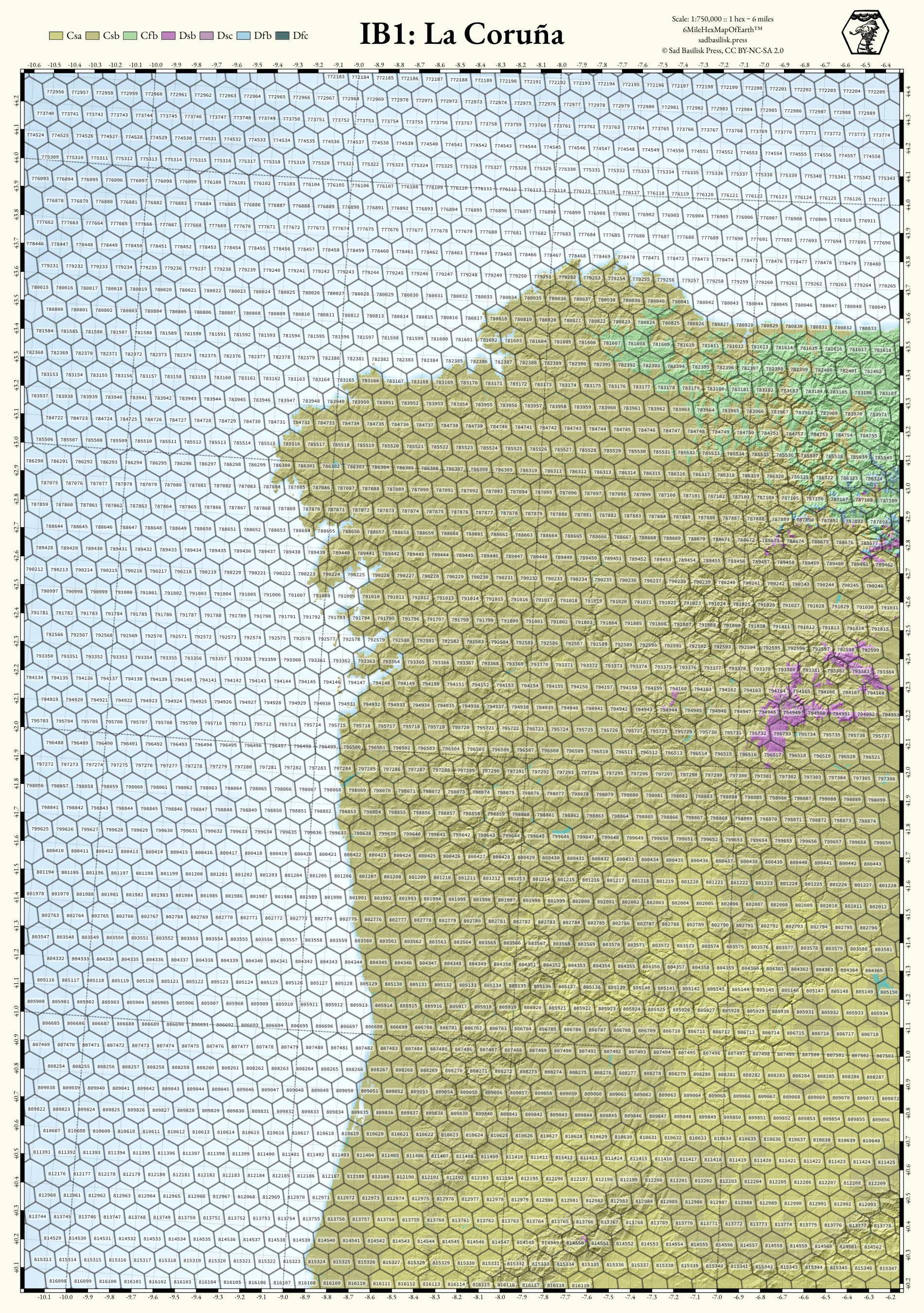 How do I follow along? How do I know when the kickstarter is happening?

The best ways of following along (in order) are:

Can you make me a custom map? Or can you work on X region next? Or can you change X map to include Y?

Yes. We make maps by request for members of The Brood.

I love/hate the project or have other advice or requests; how should I communicate that to you?

Feel free to send me an email at mario@sadbasilisk.press; I’m happy to hear what you like or don’t like, or what you think would work better.

What are you planning on working on in addition after the initial project is completed?

Subsequent projects will depend on interest. Here are some ideas:

Will you only work on those additional projects once the whole world is mapped?

Not necessarily, but ideally, yes; I would like to complete all the “base” maps for 6MileHexMapOfEarth first before working on subsequent projects, but if everyone is clamoring for something else, I would be willing to pivot.

What information will be represented on the maps?

At the very least:

One side of a sheet will show the map with graticules and ID numbers for the cells, and the other will not. The popular and long-lasting lakes will be put in the maps (Lake Constance, the Great Lakes, the Caspian Sea, etc.), but since most rivers, watersheds, and other lakes and canals would date the maps, we are hesitant to put them in; we will survey fans to see what they would like most and go from there.

Digital maps (distributed as pngs/pdfs) and physically printed maps. I will run a kickstarter to fund the creation of:

The digital maps meant solely for digital distribution (encompassing the entirety of the Earth) would be 10s of thousands of pixels wide, like the one for Iberia above.

The physically printed maps would consist of “sets” of maps for particular regions. For example, “Iberia” would be one set; “England, Scotland, and Ireland” would be another set. Each set will consist of 8+ sheets of double-sided, full-color, 19“x27” 100lb text paper. One side of the map would have the map with ID numbers over the hexagons and graticules, and the other side of the map would lack the ID numbers and graticules (but they would both show the exact same map underneath; the whole point is that you can flip it and have more or less information). If there is interest I would do print runs for less expensive maps at a smaller scale (say 1:3,000,000) and on smaller sheets of paper for regions as well.

The following is important: particular sets will only get printed if there are enough backers (we are shooting for a minimum of 50 backers per set). Otherwise it would not be economical to produce them (more details in the “How will backing the physical sets work?” question).

Will all the sets cost the same amount of money, or will they be priced differently?

They’ll be priced differently. Some sets will have fewer or more sheets than others, depending on their size, and this will directly affect the price of a set.

How much will the maps cost?

The large, physically printed maps will probably start at $50 for a set. The smaller scale maps on smaller sheets of paper would cost substantially less than the larger ones. We’re still trying to decide on a good price for the digital maps, but we’re thinking it will probably be $20. If you get any of the physical sets you’ll get the digital maps for free.

Can I get more than one set?

Yes, you can get more than one set, you just need to increase your pledge amount to cover the cost of the sets you want to purchase. For example, if the Japan set costs $60 and the Korea set costs $40, you would need to pledge at least $100 to get both sets.

How will backing the physical sets work? What happens if the set (or sets) I want don’t get enough backers by the time the kickstarter ends?

Every half-hour, we will look at all the surveys for all backers, look at their pledge amounts, and compute the number of backers each set has. That information will be reported back on the kickstarter homepage so everyone can see which sets have however many backers.

When the kickstarter ends, we will look at all the sets that don’t have enough backers, and eliminate the one with the fewest; we’ll then recompute the numbers for backers and sets. We’ll continue that process until all the remaining sets are backed.

Will you be offering stretch goals on a “set level”? Like if a set has a ton of backers, will it get better?

Potentially; it depends on how flexible our printer is. We would like to offer thicker paper for successful sets, but we need quite a few backers for a set before it becomes economical (on the order of several hundred).

What if I want a part of the world that isn’t on the kickstarter?

There will be stretch goals that could potentially unlock all regions, so the best way to get your part of the world printed/digitized is to contribute to the kickstarter and get your friends to contribute as well (I would suggest that you all contribute to regions adjacent to each other so you can play together on a huge connected map). In the case that your region doesn’t get printed or digitized in the first round, don’t despair; your region will get worked on eventually, potentially in the next kickstarter.

When will the maps be produced?

If the kickstarter is wildly successful, 6 months. If it funds at all, within 3-6 months, depending on the number of different sets that get enough backers/the number of stretch goals that are unlocked. Assuming it funds but it’s not wildly successful, we will produce digital maps for all of Europe below 60 degrees North and west of 35 degrees East, all of the Mediterranean basin, Japan, Korea, Texas, and Mexico. If there are at least 50 backers at the print level for each of those regions, they’ll get physically printed out as well. Other regions would be unlocked for digital production/print as stretch goals, or if they’re not unlocked, in subsequent kickstarters. I have the maps for most of Europe completed, and am finishing the pipeline to assist in the creation of the maps for the other regions, so even if it is wildly successful, I will still be able to deliver within the 6 month timeframe.

If I miss the kickstarter will I be able to get any maps?

Yes; we will be taking orders for maps via our website after the kickstarter ends. We’re going to keep the ones that got successfully backed and that there’s substantial demand for in print.

How will the digital maps be distributed?

They’ll be distributed via a download link sent to you via email.

What will be in the digital maps?

The digital maps will consist (at minimum) of the huge, 10,000 pixel wide images, and if one or more of the physically printed sets are unlocked, the individual digital files that are used to print those. There will be stretch goals for additional types of information to go into the digital map package.

Will you be releasing any tools to help manage the maps?

Yes; we will be releasing a geo-database that will cross-reference the ID numbers/coordinates of the hexagons with wikipedia pages and such. There will also be tools for generating random data for a hexagon, such as determining the weather in a cell given the season/month/day; determining the amount of time it takes to travel through the cell (given the weather); etc.

Will the maps be laminated?

The primary printer we’re considering does not offer hard laminate. One of the first stretch goals will be for the purchase of an industrial laminator so that we can offer hard laminate as an option. This would make the maps durable and allow you to use dry/wet erase markers on them without damaging them.

Will you cover the cost of shipping?

No, that will have to be paid for separately after the kickstarter ends.

What made you want to do this?

In early 2019 I was running a pseudo-historical campaign set in the Danubian basin for me and my coworkers. I really wanted a hex map of the world, and it didn’t exist, so I decided to try and make one. Two years later, here we are.

Don’t you think making a hex map of the whole world is a little ambitious?

Yes, even a little crazy. Assuming China got put in one set, it would require over 130 distinct 19“x27” sheets of paper and would weigh about 12lbs. That is a lot of maps. But then you would have a hex map of all of China, which would be equally crazy.

Would you be willing to make maps using anything other than hexagons?

Would you ever be willing to create an interactive version of the maps? What would it have?

Most definitely; that would be the final goal, and assuming the kickstarter(s) is(are) successful enough, it would happen sooner rather than later. You’d be able to zoom in and out, use hexagons of different sizes on the fly, use different “base” maps that showed different information, some of which would correspond to particular years or events (e.g., the world as it existed in 1638, or 1939); it would include a voice/video/chat interface; you’d have a private dashboard for managing campaign information and such; it would have an API that you could design games around and query for information. It would be “the whole kitchen sink”.

What tools are you using?

My workstation is running Linux/Fedora and has 128Gb of RAM and 16 threads. I use emacs as my text editor. I make heavy use of the QGIS python libraries, GDAL, GRASS, and SAGA. For post-processing (which is minimal) I use GIMP. Everything is glued together with bash. The digital elevation models I’m using are SRTM (for the most part), ASTER, and ArcticDEM. The website is generated via hakyll, served by nginx, and hosted on digitalocean.